Climbing the Ladder of Beatitude 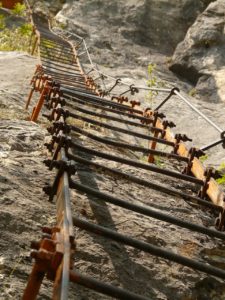 Peace be with You,

This weekend our readings invite us to pick up right where we left off our lesson as to how we are to live in imitation of the Lamb of God.  But first let’s recall what we have learned over the past couple of Sundays.  To begin, two weeks ago, we found that as individuals created through the Son in imago Dei, it is in accordance with our nature to respond to the gift of life eucharistically, i.e. with a disposition of thanksgiving towards the One who has brought us into being.  In conjunction we learned that this Eucharistic response echoes the response of the Lamb of God, who overcomes the division of sin and death by the offering, “this is my body, given for you,” to both the Father and the human family, in order to reconcile the two, acting as a metaphysical bridge between the disparate natures which we traverse by imitating the action of the Son.  Then last weekend we found that it is by this very same response that we simultaneously enter into communion with our Creator thus being transformed from the darkness of division and death into the Light of Life and so become living nets casting the Light of the Life in which we participate into the fallen world in the hopes that all may be gathered into the unity of the glory and life of God.  Today, we learn how it is that we are to participate in this transformation of our lives in order that we may ever more effectively become nets drawing the world into unity with its Creator.

Change is difficult.  I am not telling you anything you don’t already know but humor me for a second.  Call to mind the last time you had to undergo change of any kind.  It could have been a change of residence, possibly a move away from a place you called home for a long time.  Perhaps it was a change of employment.  Or perhaps it was an attempt at a New Year’s resolution, which statistics show are in serious danger of being set aside right around the 1 month mark into the New Year.  In other words if you made a New Year’s resolution you are more likely than not to give up on them any day now.  Now I don’t bring up all these examples to be a tremendous downer, but instead simply to demonstrate the statement I began with; change is hard.  Why is that?

Well, I am not going to attempt to give a scientific or even a comprehensive answer to that question.  However, I will put forth a couple of ideas that I think greatly contribute to our seeming inability to undergo change either willingly or successfully or both.  Let’s begin by saying that quite often the experience of change is different from our planning of it.  Why?  I would suggest because we naturally desire a life of dynamism, after all, we are by our very nature made for participation in the dynamic life of the force that underlies all of reality, i.e. the Triune life of our God.  However, while we naturally thirst for this dynamism there is something within us that seems to just as naturally defy said dynamism, wishing to stay put, able to define ourselves in a certain profession, title, socioeconomic status, and even geographically by putting down roots and owning a home.  Now, I am not saying that these things are bad in themselves; instead my focus is on the desire to define ourselves.  Notice what this really is, it is a desire to become stagnant, to stand in one place and say, “this is who I am, this is my identity.”  But notice what has happened here, in attempting to define ourselves and plant our flag in some metaphysical space, we have done precisely what Adam and Eve did when they reached up at that tree and plucked out the proverbial apple, we are grasping for existence on our own, defined as we would define it, and this is antithetical to the dynamic nature for which we have been created.

Let’s take this one step further.  Quite often when we set out to change we often become disenchanted with the difficulty we face in carrying out said change.  Ask anyone who has tried to quit drinking, smoking, or attempted to refrain from that delicious piece of chocolate to cut a few inches off their waist line, change is not as simple as saying, “Yeh, I can quit.”  In other words, what has happened is we have overestimated ourselves.  Coincidentally this is precisely why people in AA have a sponsor and why experts tell us that if you really want to accomplish your goals, you are far more likely to do so if you tell someone who can hold you accountable.  In short, attempting to change is the quickest way to bring us down to reality, giving us a realistic view of what we are made of.

This is precisely what our readings for today call us to understand.  But first, let’s take a quick step back to take note of a detail contained within our gospel reading for last week.  Therein we were told that as Jesus began to preach and say, “Repent, for the kingdom of heaven is at hand” (Matthew 4:17).  The word here translated as “repent” is the Greek word metanoeite, which means literally to change one’s mind.  Two weeks ago we saw that the attitude of the Lamb of God which we are called to imitate is one of humble obedience (Philippians 2:6), and it is precisely humility which allows for an attitude of repentance that Jesus called us to last week and which is highlighted in our readings for today.

The reason humility has the ability to transform the way we look at things is seen in the literal meaning of the word.  Humility has its roots in the Latin word humus, which means earth or ground.  Thus, a humble attitude gives us a down to earth or realistic view of reality, beginning with ourselves and our metaphysical situation in life, a metaphysical situation characterized by complete dependence on our Creator for every moment of our existence (Wisdom 11:24-25), as he “sustains all things by the power of his word” (Hebrews 1:3; cf. Colossians 1:17).  Today, in our gospel reading from Matthew, it is this very Word by whom all things are held in existence who begins his famous Sermon on the Mount with the proclamation of the beatitudes.

Our gospel reading begins by telling us, “When Jesus saw the crowds, he went up the mountain; and after he sat down, his disciples came to him.  Then he began to speak and taught them saying…” (Matthew 5:1-2).  To us this appears to be a simple description of setting, but for Jews the actions described here are extremely significant.  Notice we are told that first ‘he sat down’ and then ‘his disciples came to him.’  Why this order of words instead of simply saying his disciples were with him and he began to teach?  Because in Jewish culture, when Rabbis taught, they did so sitting down.  However, Jesus isn’t sitting in any ordinary chair, he is sitting atop a mountain.  We might recall here that Thomas Aquinas described wisdom as the purview of God, or the view from the mountaintop, from which the order of things can be seen.  Notice now the beautiful intricacy here.  We have the very Word of God through whom all things had been made and in whom everything is upheld in existence (Colossians 1:16-17), the One whom Paul and many Church Fathers after him would identify as the very Wisdom of God (1 Corinthians 1:24), physically ascending to the purview of wisdom to teach us.  To be sure, what is to follow will have much to tell us about the reality of how things are.  And the first piece of advice he has for us is to be humble, as he says “blessed are the poor in spirit” (Matthew 5:3).  If we remember the definition of humility, this makes all the sense in the world, for having a proper view of ourselves, i.e. knowing that our entire existence depends upon God at every second of every day, places us in a position to begin growing closer to him.

St. Augustine of Hippo read the beatitudes as a recipe for spiritual development, identifying each beatitude with a stage of spiritual development (Our Lord’s Sermon on the Mount, Bk. 1 ch.4).  Accordingly, Augustine tells us that the words, “blessed are the poor in spirit,” indicate that the “first source of blessedness is humility,” as it makes each subsequent stage possible.  Next, Augustine identifies meekness with piety, which seeks to learn all it can from scripture.  Stage 3 is then characterized by understanding, as those who understand what we have lost in being separated from God mourn our current state.  This realization leads us to the next of hungering and thirsting for righteousness, as we seek to transcend our current state and live according to the blessedness or happiness for which we were created.  Having arrived at stage 5, we become merciful as we look to assist others who have become entangled in the difficulties of life, desiring to undertake this journey with them.  Living mercifully makes us pure of heart, thus bringing us to the next stage where we are able to more easily discern right from wrong.  “Finally, the seventh maxim is wisdom itself: it is the contemplation of truth, making the whole man peaceful, and taking on the likeness of God” (ibid.).  Seeing this as the pinnacle, Augustine saw the eighth beatitude as returning us to the beginning, for “it presents and approves something consummate and perfect” (ibid.).

My friends, today we are called to begin climbing the ladder of beatitude, and as climbing any ladder requires having firm footing on the step below and concentrated focus on the step above, so it goes with us as we seek to increase the intimacy which we share with our God.  As the Incarnation teaches us, we have been created to share in the very life of God, but we cannot get there based upon the force of our will.  Yes, change is hard, and being transformed from a sinner to a saint is the most difficult transformation any of us will ever undergo.  Within this process, the humility our God tells us to begin with allows us to see two things: “For mortals it is impossible, but for God all things are possible” (Matthew 19:26).

Your servant in Christ,

3 thoughts on “Climbing the Ladder of Beatitude”