Andrei Rublev: A Journey to the Divine 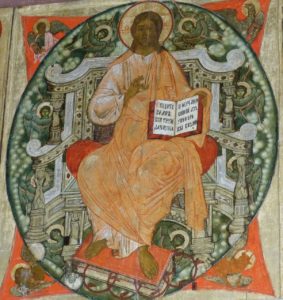 Andrei Rublev: A Journey to the Divine

The Russian historical drama, Andrei Rublev, is based on the life of the famous icon painter who lends his name to the title of the movie.  Set in 15th century Russia, the tumultuous historical time period enables director, Andrei Tarkovsky; to explore the depths of the human condition by examining it at a moment when it is particularly fragile, thus laying bare its inner character.  It is ultimately the brokenness of the human condition that allows Tarkovsky to expose its inner beauty.

The prologue to the film provides us with the problem which Tarkovsky is trying to expose.  There, we find the character Yefim, hastily preparing to take off in a hot air balloon.  Obstructed by an angry mob, Yefim is ultimately able to mount the balloon, and set flight, momentarily experiencing triumph, only to come crashing down.  A horse is then seen, struggling to get to its feet.  This scene demonstrates Tarkovsky’s understanding that within the human person exists the intuition that we are made for more than the world has to offer and we constantly, though foolishly, seek to attain it under our own power.  Instead, as Tarkovsky seems to suggest, it is precisely here, on this earth and through our human experience that we are able to realize what we are.  This message is seen in the horse, whose struggle with the earth is ultimately what enables it to stand on its feet.

We meet Andrei, a monk, as he journeys in search for work as an icon painter, accompanied by two fellow monks, Kirill and Daniil.  The monks encounter a jester who prima facie is a stark contrast to the monks; the jester preoccupied with distracting people from the misery of their everyday life, the monks seeking to deepen the human experience through an iconic encounter with the divine.  However, as it soon becomes clear, the monks are every bit as much enmeshed in the human struggle as the jester, as seen in the subsequent squabbling that results from their opposing egos.

It is precisely the seemingly universal trivial outlook on life that perturbs the great icon artist, Theophanes, whose annoyance with the ignorance of humanity has brought him to focus solely on the divine, as he tells Andrei, “I serve God, not man.”  This complete turn away from humanity likewise proves erroneous for Tarkovsky, who tempers the negative outlook on humanity of Theophanes with that of Andrei’s, who sees a universal goodness in humanity, relating to Theophanes that even a happy glance of a fellow human can have a transformative effect on one’s outlook, making it lighter, “as it is after Communion.”

This Christian humanism underlies the whole film.  Each character Andrei meets will tell us something of the precarious situation in which we exist, between good and evil, ever struggling to avoid the latter.  Ultimately Andrei realizes this is an impossibility, as we see in his encounter with the promiscuous pagans, and the passion with which he kills a soldier in defense of Durochka, who is described as a holy fool.

This inability to avoid evil greatly disturbs Andrei, who takes a vow of silence as an act of penance, and promises to care for Durochka, keeping her around to ‘remind him of his sin.’  For Tarkovsky, this is an overcorrection, for it is one thing to recognize our weakness, another to be so dismayed by it that we cease to live, keeping even the good we have within us locked up.  Thus, Durochka is carried away by the Turks, opening up the possibility for Andrei to live again.

However, Andrei is in need of a liberator, which he finds in Boriska, a young bell maker on his own journey of finding self.  In this last portion of the movie, Andrei is given a front row seat to his own life reflected in Boriska.  Having completely spent himself in successfully casting the bell, Boriska collapses.  Identifying with both the boy’s artistic ability and accompanying disorienting unhappiness, Andrei embraces the boy in Pieta fashion, and it is there, at the base of a wooden post, in the mud of the earth, that both find the meaning of life: to share the talents given to you by God in loving service to others.  This and only this, has the ability to bring you into the life of God (symbolized by the Trinity Monastery mentioned by Andrei), the experience of which enables the artist to convey this truth in the form of art.

Ultimately, this is the message Tarkovsky wants to share with us it seems.  Yes, the intuition that Yefim has is true, we are meant for more, much more!  However, we are not meant to flee the world, nor can we transcend this world under our own volition; rather, it is precisely within this world that we are meant to begin experiencing the life of salvation here and now by joining ourselves to Christ in a life of self-giving love.  In doing so, we both have a transformative impact, we may even say a redeeming impact on the world around us, and begin experiencing the life of God (though in an incomplete and veiled way) we were created to share in to begin with.

Andrei Rublev is a very long and complicated film.  Here, I have only scratched the surface of all that it has to offer in the way of bringing us to a place to consider what it means to be human, and how to negotiate the life we have been created to live in a very fallen and broken world, making it well worth the time spent.